What Is The Septuagint? 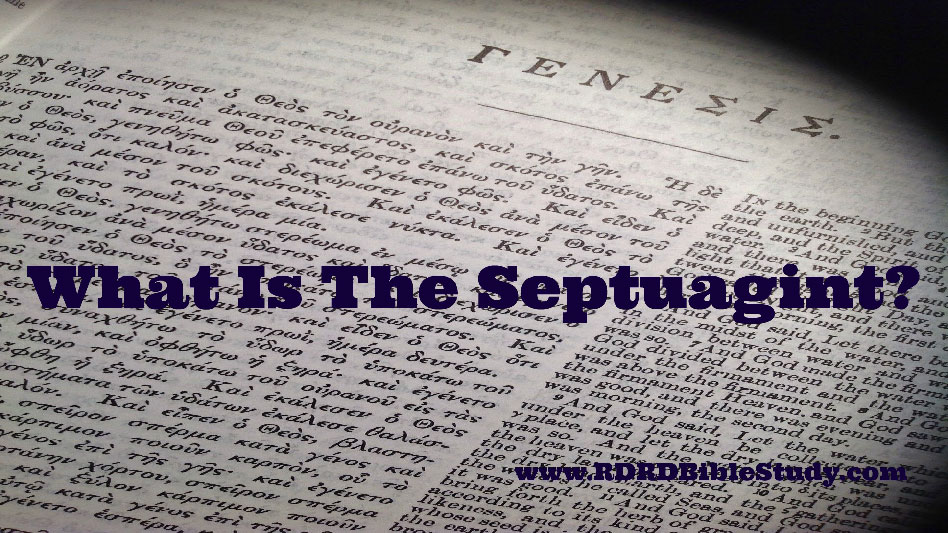 In a nutshell, the Septuagint is the Greek translation of the Hebrew Old Testament.

But, you are reading a blog on bible study which means you are intelligent and inquisitive.

Therefore, you want to know more. And one of the things you want to know is this: what does the Greek OT have to do with learning to study the Bible? Am I right? Of course, I am. So let’s get to it.

Why Was the Greek OT Named “Septuagint”?

“Septuagint” is from the Latin septuaginta, which means “seventy”. Tradition holds that 70 (or 72) Jewish scholars in Alexandria, Egypt translated the Hebrew Bible into Greek beginning somewhere between 285-247 B.C. (Completion of the translation is debated.)

Frequently, you will see the Septuagint referred to by the Roman numerals for seventy LXX. The following terms are often used interchangeably:

If you see all of these terms in a book or article, they are referring to the same thing.

Why Was The Septuagint Written?

One of the most widely accepted reasons for the composition of the Septuagint is that the Egyptian Pharaoh, Ptolemy Philadelphus, wanted a copy for his Library at Alexandria. In particular, he wanted a copy of the Jewish Law, the sacred text of the Jews. There is debate over whether this initial request meant the first 5 books (Pentateuch), or the entire OT.

All we know for sure is that the entire OT was eventually translated. Regardless of how, and when, the translation occurred. Except for extremely technical and academic books it is widely accepted that Septuagint, LXX, etc., refers to the entire OT. 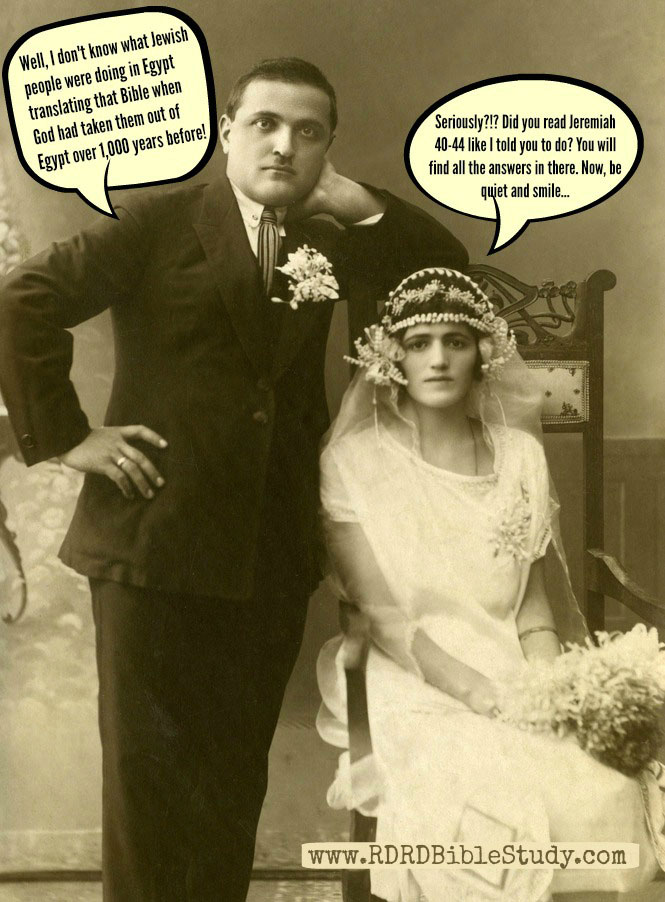 Use Of The Septuagint

The Septuagint was translated from Hebrew to the common language of the period, therefore becoming the “Bible” for Greek-speaking Jews. Alexandrian Jews used the translation because it was written in their spoken language and because they had become less familiar with the Hebrew language. As the Jews used the LXX more and more, it became an authoritative version for Jewish life and worship.

From Alexandria the Seventy spread among the Jews of Asia Minor (dispersion Jews). By the time of Jesus’ birth, the Septuagint would have been the translation of OT Scriptures most commonly used. Its early widespread use and acceptance is evidenced by the writings of contemporary writers. Both Philo, the Alexandrian Jewish philosopher, (B.C. 25-50 A.D.) and Josephus, the Jerusalem-born Jewish historian (37-100 A.D.), quoted from the LXX.

The Septuagint became the “Bible” for Christians as well. (Are you beginning to sense the importance of the LXX for bible study?)

As Christianity spread throughout the Roman Empire, this translation was used within the new Christian communities. During the same time, it was still being used by Diaspora Jews in the synagogues. This led to Gentiles being able to debate non-Christian Jews on the meaning of Scripture. Eventually the Jews criticized the Septuagint. Around this time, the Jewish people also began to deny the authority once given to the LXX.

Use Of The Septuagint In The New Testament

OT Scriptures are quoted throughout the NT by both Jesus and the NT authors. The majority of OT quotations in the NT come directly from the Septuagint, though sometimes a NT author will provide his own translation of a Hebrew text. The Septuagint’s vocabulary and style, in general, is found in the NT’s theological terms as well as phrases used to describe the spiritual life.

All of this makes the LXX an important resource for original languages studies and therefore, an overall understanding of Scripture.

Differences Between The Hebrew OT And The Septuagint

Though the Septuagint is a translation of the Hebrew Bible, there are some differences:

Apocrypha are included in the

Apocrypha are not included in the

The Christian Bible retained the Septuagint’s ordering of Biblical books rather than the order found in the Hebrew OT. This is understandable since the LXX had early widespread use and considerable influence in the early Church.

The Septuagint’s Importance In Bible Study

From this brief overview, you can see the importance of the LXX for Bible Study. The Septuagint, for the most part, is used for doing original language word studies. It is very helpful in determining the meaning of a word or in what sense it is being used. The LXX is beneficial in studying both the Hebrew OT and the Greek NT.

I know you can’t wait to dig in! Many resources are available to help with your endeavors. Here are a few recommendations.

Normally, the Greek words used in the Septuagint are included in the larger Greek lexicons/dictionaries (which are a must-have for NT study). The most popular Greek-English Lexicon is A Greek-English Lexicon of the New Testament and other Early Christian Literature, edited by Frederick W. Danker, and published by the University of Chicago Press. It is largely referred to as BDAG, an acronym for the authors.

One resource you will definitely want to have is a Greek-English Interlinear of the Septuagint. Lancelot Brenton’s translation of the Septuagint is the standard. The Amazon Kindle edition of Brenton’s book is included on the Resources Page along with links to the following recommended books for LXX Study:

There are also some very good free online resources as well as Bible apps for your phone or tablet.

For quick Bible searches, tons of original language helps, and perhaps most importantly, ease of use, Blue Letter Bible is the best.  BLB also has a mobile app that is as good as the website.  Here’s a screenshot of a search on Genesis 1 in the LXX: 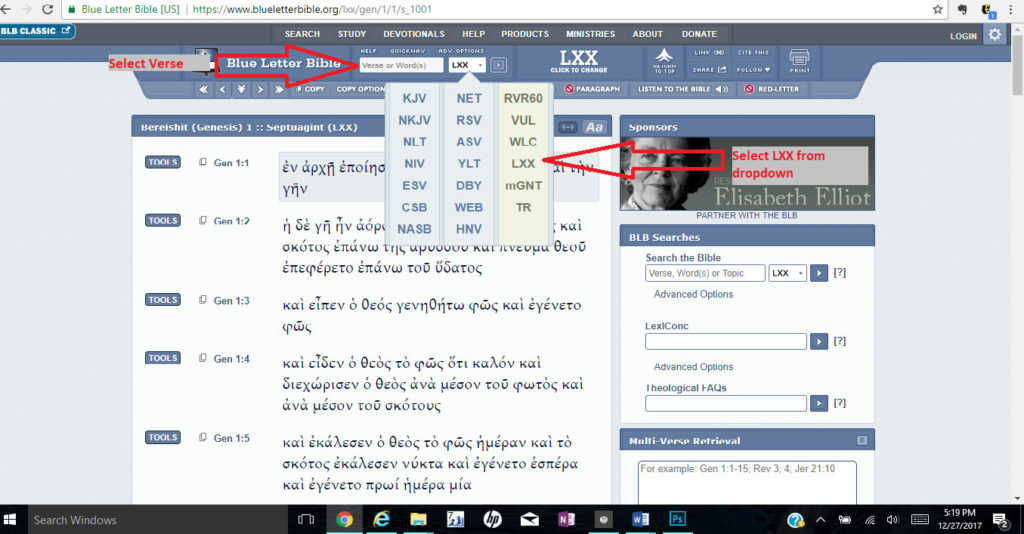 English and Hebrew can be added to this view for cross reference, as well as multiple dictionaries and commentaries.

May the inclusion of this important and historical translation of the Old Testament Scriptures be beneficial in doing original word studies. And always, may it be used to the glory of God!

The grace of the Lord Jesus Christ and the love of God and the fellowship of the Holy Spirit be with you all (2 Cor. 13:14)