Roots and Stems and Forms, Oh My! – Using A Hebrew Lexicon 101

Looking up words in a Hebrew Lexicon can be a little overwhelming at first. The alphabet is unrecognizable. Diacritical marks seem to cover the page. And the sheer volume of abbreviations surrounding any one definition is enough to intimidate a rabbi (not really).

Take a minute to look up an English word in a non-digital Merriam-Webster or The Oxford Dictionary. These dictionaries also contain an unrecognizable alphabet to many people in the world, as well as many abbreviations. From your own knowledge of English, you know that the letters aren’t that intimidating. You also know that not all the abbreviations are as important as others. 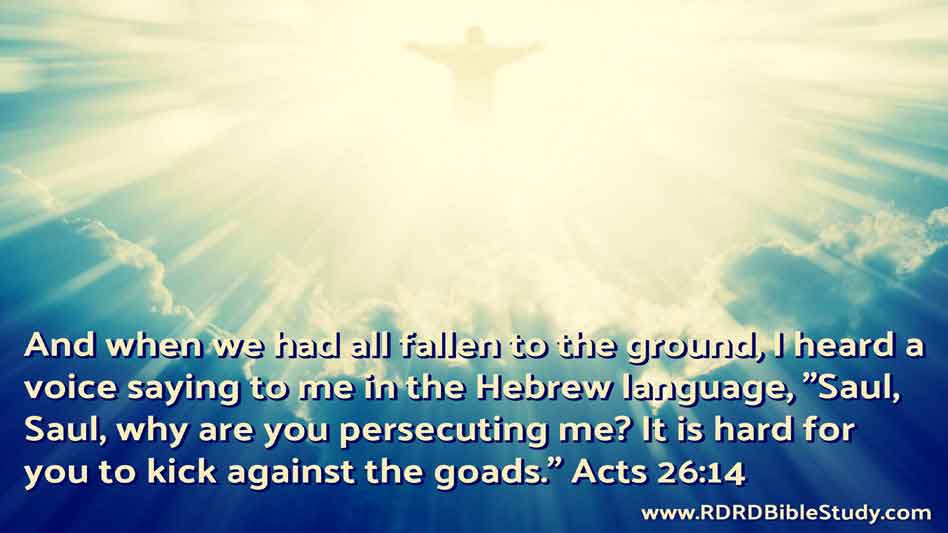 Some of the best people to ever walk the earth spoke Hebrew.

Like any other subject that a person attempts to learn, Hebrew requires effort to push past the learning curve. And you can do it! I believe it is God’s will that all people seek skills to help in the study of His Word. And Hebrew would definitely qualify as one of those skills.

You can read about the effectiveness of learning in bits and small chunks here. That’s how Hebrew will be tackled on RDRD.  Ready?

When looking up words in an English dictionary, you already know how important it is to know the English alphabet. Same for Hebrew. Even if you are using an app or other bible software, knowing the alphabet is extremely helpful.

Most beginning grammars will cover the Hebrew alphabet in the first chapter. As a supplement to help in learning the sequence of the alphabet, links to the following two items are listed on the Recommended Hebrew Resources page under “miscellaneous.”

The cool placemat doesn’t have the vowels, but they are explained on the Hebrew Grammar Quick Reference Study.

Following are a couple of images of the Hebrew alphabet. The letters are read right to left. 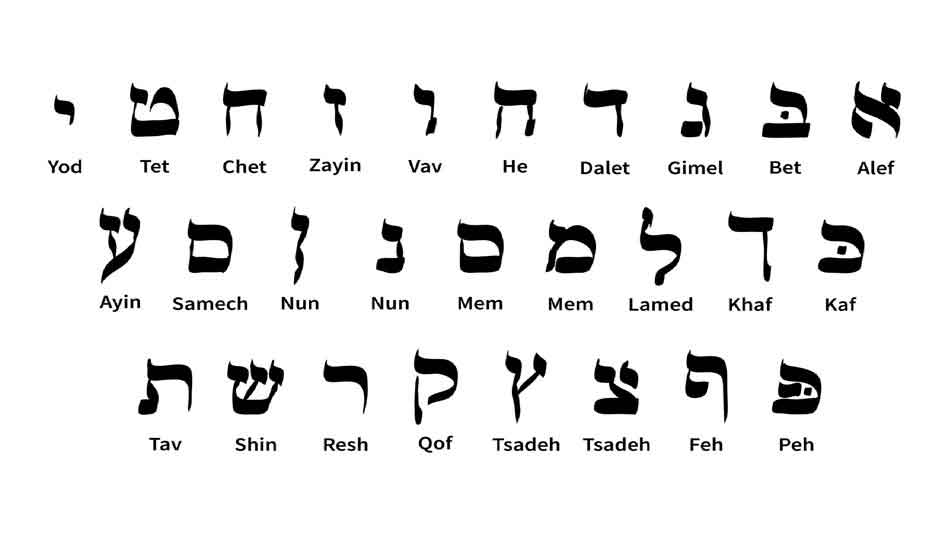 In this image, some of the letters have a dot in the middle—bet, kaf, and peh. This dot is called a dagesh forte—yes, the same forte as in music. These letters do not always appear with the dagesh forte. Rules surrounding when the dot appears and when it doesn’t can be found in the introductory Hebrew Grammars.

Also note the letter shin which looks similar to an English capital “W”. This letter can have a dot to the far left of the top of the letter (letter name pronounced seen), or to the far right (letter name pronounced sheen). The far left dot makes the “s” sound while the far right dot makes the “sh” sound. When looking up words beginning with this letter, keep in mind that words beginning with the shin with the leftward dot will appear before the shin with right dots in the lexicon. 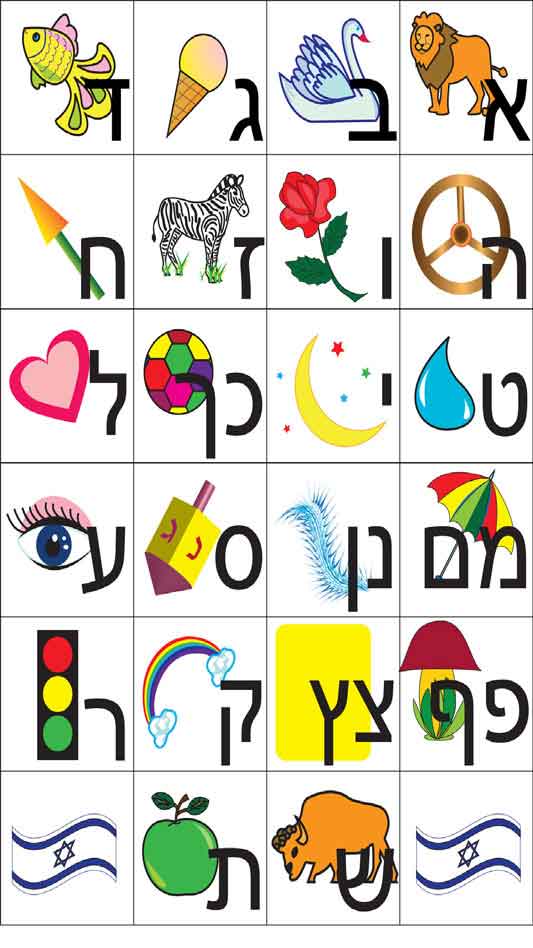 Did you know that “zebra” is a Hebrew word? See? You are already learning Hebrew. The letter ז is similar to the English “z”.

However, the pronunciation of “zebra” is different:

Also note that some of the squares have two characters for a letter. The second letter (from right to left) is how the letter is written if it appears at the end of a word.

Words in Semitic languages are formed by adding prefixes, suffixes, and infixes to a lexical root. Plenty of Hebrew Grammars have detailed explanations of word formation rules, such as doubling of consonants, strengthening a vowel, how to identify the forms based on consonants and vowels, etc.  There is no reason to repeat that here. Refer to the Recommended Hebrew Resources page for a list. But first…

Some “Maybe” Exciting Things About The Hebrew Language

If you like learning languages, (like I do), then this will be exciting stuff. If not, well, please read this extremely short section anyway.

The majority of roots in Hebrew, and other Semitic language, normally consist of three letters, or radicals, i.e. triradical root. Morphology determination is based on the addition of prefixes, suffixes, and infixes—mostly by vowels inserted in the root, aka lexical root, lexical morpheme—“to the three radicals [which] determines the precise sense and function of the word. These modifications form the various nouns, verbs, and other parts of speech” (Ross, 20).

On these [the three letters] the meaning essentially depends, while the various modifications of the idea are expressed rather by changes in the vowels… Such a stem may be either a verb or a noun, and the language commonly exhibits both together, e.g. z-r-a he has sown [and] seed; s-k-l he was wise [and] a wise man.

For practical purposes, however, it has long been the custom to regard as the stem the 3rd pers. sing. Perf. Qal since it is one of the simplest forms of the verb, without any formative additions. Not only are the other forms of the verb referred to this stem, but also the noun-forms, and the large number of particles derived from nouns; e.g. he was holy. holiness, holy [all have the same stem, even in English].

The abbreviation in the Gesenius quote above–

The verb parsed in this manner–translated he/she/it “performed the verb”–is the verbal form, e.g. ground-form or pure form. This form is used to look up words in a lexicon. The root letters will be the same, but the vowels will be pointed differently, that is, the vowel points will be inserted according to the word’s function.

An English Dictionary vs. A Hebrew Lexicon

For me, a person who learns by doing, this explanation sounds difficult. But the actual process of doing it is much easier than trying to explain it.

Suppose you were translating “I saw” as in “I saw a black bear”. If you look up “saw” in the dictionary, it will say “noun: a tool for cutting; verb: to cut something in half”. For the past tense of “see” it would be necessary to look up the present tense word “see” to get the definition of the past tense verb “saw”.

As far as vowels being different, this can be observed in the English “run” and “ran” along with many other examples.

Others regard the three stem-consonants as a root, in the sense that, considered as vowelless and unpronounceable, it represents the common foundation of the verbal and nominal stems developed from it, just as in the vegetable world, from which the figure is borrowed, stems grow from the hidden root, e.g.

[From the consonants m-l-k both verbs and nouns can be formed, i.e. verb-stem “he has reigned,” “they rule” etc.; noun-stem “king, queen, ruler” etc.]

Plants have a common “root.” They also have a main “stem.” From the stem multiple stems and leaves can be formed. Still they all originate from the same root.

Following is a concise statement regarding stems and roots from Allen Ross’ 2001 Introducing Biblical Hebrew:

The basic form of any Hebrew word is the root or, more technically, the lexical morpheme, which is a sequence of (usually three) letters consistently found in words having related meanings. A verb form is a combination of this lexical root [morpheme] and modifying affixes (i.e., suffixes, prefixes, and infixes). …the basic verbal system [is] called the Qal stem. In dictionaries, the Qal perfect tense 3msg form of the verb is normally used to represent the basic lexical form of the root.

The lexical root may be further modified by other prefixes and vocalization patterns. These modifications are called verbal stems or themes. Hebrew has seven major stems that fall into three basic groups based on the close relationship between them (Ross, 187):

All this means is that Hebrew has stems and Hebrew has roots. Words are formed by adding affixes and vowel patterns to roots. Keeping the distinction between stems and roots in mind helps greatly when using a Hebrew lexicon.

As you begin to research the meaning of words from the Hebrew text, this information will be helpful in using a lexicon. Especially learning the sequence of the alphabet and being familiar with what constitutes the lexical root. Even some software will require understanding that the Qal perfect tense 3msg form is used as the “basic lexical form” of the word—the word appearing in the lexicon.

Gesenius was an early 1800’s German theologian, exegete, and what we would call a “professional” philologist. As a philologist he was interested in technical details and classifications of language. Basically (and this can be read in the section “Stems and Roots” in his Hebrew Grammar) he didn’t agree with calling the three letters, i.e. m-l-k, for instance, a “root” (note how his quote in the section Stems and Roots begins with “Others regard…”).

Technically, some triradical roots may have evolved from an ancient 2-radical form.  Words such as father, mother, brother, are written with only two radicals still today. Since a word that has three radicals could conceivably have developed from a 2-radical root, picking up the third letter through the ages (philology) for vocalization or other purposes, Dr. Gesenius rejected calling the 3 letters “root.”

Obviously, and understandably, he was (in his early 1800’s) and was not (in modern times) writing to an audience for the practical teaching of Hebrew. Using the word “root” to describe a 3-radical root, even if it evolved from a 2-radical root over the centuries, for us today is a practical way to discuss the word and to find its meaning and cognates for our main goal—the precise interpretation and understanding of God’s Word. There is no doubt Gesenius had the same goal, but he was also a dedicated philologist.