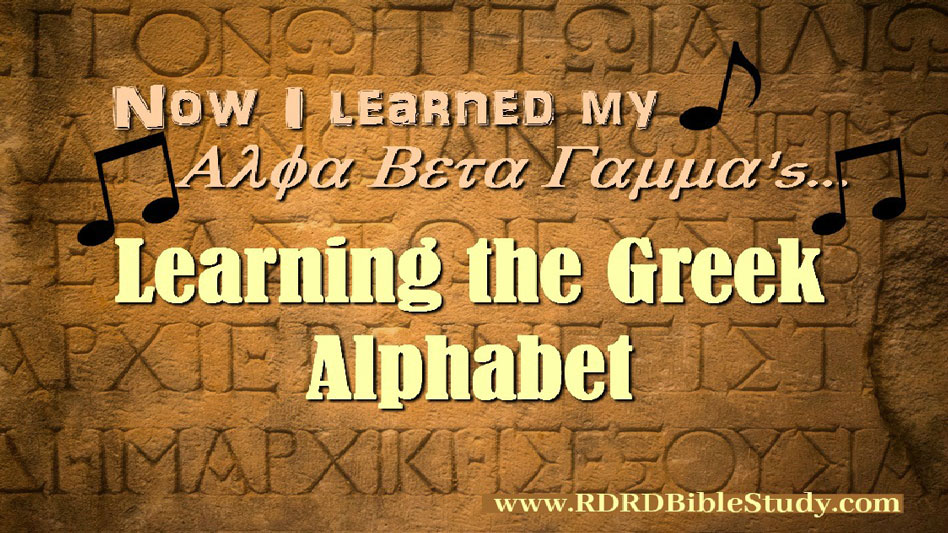 Learning the Greek alphabet is an incredibly handy tool to acquire for Bible Study. If you have that “I don’t know about that” look on your face, no problem. It’s totally normal to resist the idea at first. Maybe you are thinking “Wait a minute now. Greek?” And then you (and 5 million other people) will say “But it’s Greek to me.” And then we will all laugh—some genuine, others, not so much. 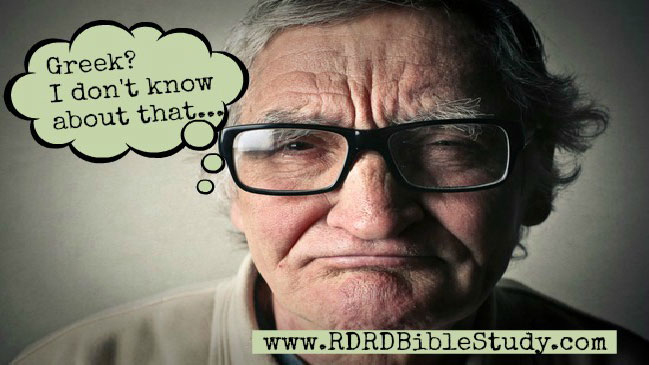 This is a classic “I don’t know about that” look.

Or, if you are planning on using Bible software, maybe you’re thinking “Why should I learn some ancient alphabet when this app will do it for me?” One word. Chillax.

If you are already using Bible software, it is almost certain that you have had situations where you wished you had the Greek alphabet committed to memory. Am I right?

And who knows, your Great Aunt Hilda may give you an expensive hard bound Greek dictionary. Or your grandfather, a retired pastor, may give you his collection of Writings of the Apostolic Fathers—in Greek. Then what? It will be so cumbersome to look stuff up, you will rarely reach for these valuable and timeless resources.

Many other reasons exist, but you get the picture.

How To Learn The Greek Alphabet

So how do you learn the Greek Alphabet? Same way that you learned the English alphabet – memorization.

“Whaaaaaat?? Not the “M” word.” Trust me. You will thank yourself over and over again that you did this. And the time investment is relatively small compared to the huge dividends it will pay.

The following information is adapted from Lesson 1 of New Testament Greek for Beginners, Second Edition, by J. Gresham Machen, revised by Dan G. McCartney, Pearson Prentice Hall, 2014. Instead of using footnotes in this particular post, any quotations from the book will be noted by “(NTGB, nn-nn)” where nn = the page number(s).

The following table contains 5 things about each letter:

1 – “These equivalents correspond to the Erasmian pronunciation system most frequently used in New Testament scholarship. Though there is no consensus as to exactly how ancient Greek was pronounced, most scholars agree that it probably sounded much more like Modern Greek than like this system. But the Erasmian system has the advantage of more clearly differentiating the vowels and diphthongs and therefore is [preferable in teaching].” (NTGB, 31, footnote 1)

For example, the word angel (the example will use a transliterated rendering, that is Greek letters written in English equivalents)

Angel in Greek is spelled aggelos.

Following this rule, one g after another, it is pronounced an-ge-los. (hint – when you run into these letter combinations, remember “angels” to sound out the pronunciation).

note: ι and υ are called close vowels and the others open vowels. (NTGB, 33)

A diphthong is a combination of two vowels in a single syllable.

The common ones and their pronunciation are as follows:

Common diphthongs in English such as oo, ea, ie, are not diphthongs in Greek. These combinations in Greek would be pronounced as two separate syllables.

A vowel, diphthong, or the letter ρ (Greek r) at the beginning of a word always has a breathing mark above it. It is written above the letter, and in the case of diphthongs, above the second vowel. 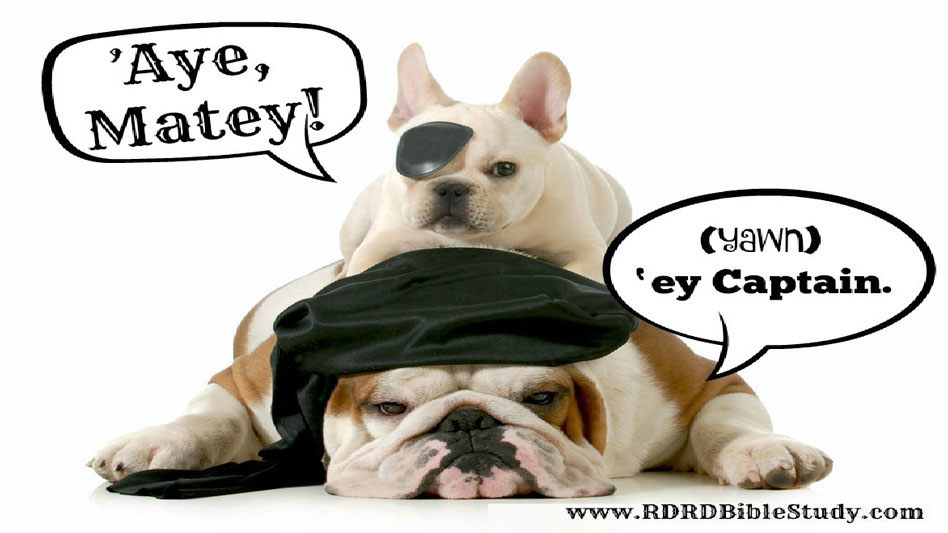 The rough breathing (‘) indicates than an h sound is to be pronounced before the initial vowel or diphthong.

The smooth breathing (’) indicates that an h sound should not be used in the pronunciation.

The rules for accents can become very complicated. In fact, there is an entire book devoted to it: Greek Accents: A Student’s Manual by D.A. Carson, Baker Books, 1985.

For our purposes here, the most common accents will be listed. In addition to pronunciation, accents can also be helpful in interpretation.

Accents are written over vowels, and in the case of diphthongs, the second vowel.

The stress in pronunciation is to be placed on the syllable that has any one of the accents.

As you study the New Testament or Septuagint—letters, vowels, diphthongs, breathing marks, punctuation, and accents represent the most common marks on the pages of a Greek text. And the components that need to be committed to memory. Yes, the “M” word. Memorizaton.

As said at the beginning—and it is worth repeating—memorizing the alphabet is an incredibly handy tool for Bible study.

So, what is the best way to memorize the Greek Alphabet? 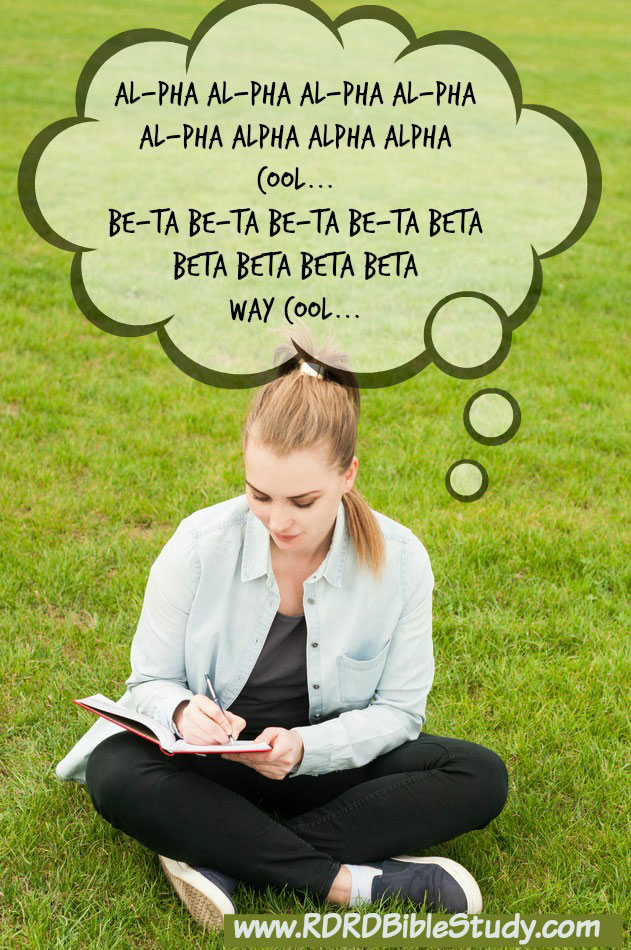 My Greek Professor in seminary, Dr. Frank Thielman, gave us a very effective method for learning the letters. Write them over and over and over again. And as you write a letter, say the name of the letter. Do it relentlessly until they are ingrained in your mind.

And there are other ways:

One “best” way does not exist. The best way is what works for you.

Send me a comment and let me know how it is going!

Oh! And here’s a handy dandy Greek Alphabet Symbols Chart for your convenience. While you are in the process of memorizing, this will be a good reference.

May the grace of the Lord Jesus Christ, the love of God, and the fellowship of the Holy Spirit be with you all. 2 Corinthians 13:14