I Have A Dream That People Everywhere Know About Biblical Genres 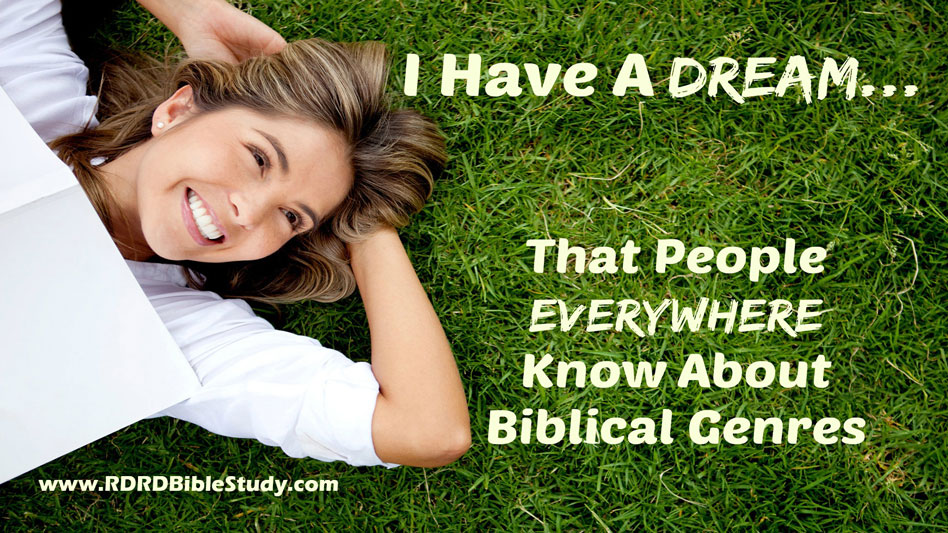 Can you name any of MLK’s great speeches or written works without citing “I Have a Dream” or “Letter from Birmingham Jail”?

According to the article “most Americans would flub this quiz.” For a “national hero whose birthday the country commemorates” we Americans have an extremely “one-dimensional” view of Dr. Martin Luther King, Jr.

The article also stated “all Americans” tend to define Dr. King by the “I Have A Dream Speech” though he gave an estimated 450 speeches per year. Several MLK scholars and personal acquaintances were then asked: “What then are the great works by King that never get the attention they deserve?” From all the answers, six works made the final cut. For our purposes, I want you to note how they are introduced.

Besides the date reference, do you see something else specified in each description?

What Do The Descriptions Answer?

First, what information is provided by the descriptions?

So what other variable is in each description. Do you see it??? That’s right!

What was written. More specifically the literary genre MLK chose to deliver that particular message. And he used multiple genres—

a category of artistic, musical, or literary composition characterized by a particular style, form, or content.

The above list tells us something we knew all along—MLK was anything but one-dimensional.

A “mock eulogy” no less—the genre of “parody” parodying the genre “eulogy” delivered in the genre “speech” used to diffuse a tense and potentially dangerous undertaking.

He did not live in a vacuum, but in a certain time and place, writing to real people in real historical circumstances.

So what does all this have to do with Biblical Genres?

If a well-known, contemporary figure such as Dr. Martin Luther King, Jr, who wrote in multiple genres—forms familiar to most living generations—is known for only one speech and one letter, how much more is that true for an author of a much, much older book with not so familiar forms?

How Do You Think About God’s Word?

Don’t we, in all honesty, (and secular culture for sure) tend to think of God as “The Ten Commandments God”? We focus on the list of “do nots” instead of all the “you cans”. The “do not eat the apple” instead of “you can eat from all the other pleasing and good trees.” The law instead of Gospel. Judgment instead of grace. 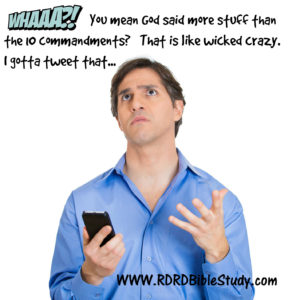 God is certainly anything but one-dimensional. This truth runs backward and forward throughout the pages of Scripture in multiple ways. One way can be found in the use of multiple literary genres. Genres chosen to best serve, and preserve, God’s message to humanity.

The biblical writers, inspired by the Holy Spirit (2 Tim. 3:17; 2 Peter 1:21), did not live in a vacuum, but in a certain time and place, writing to real people in real historical circumstances. These writers wrote about God’s dealings in history. Many literary devices, skills, forms, and content captured this sacred message for an audience in a particular historical time.

And the Word written to them is also the Word written to every generation since, right up to the second coming of Christ. To explore a little more, in the following passage about God revealing Himself to man, how many Biblical genres does Paul refer to?

25 Now to him who is able to strengthen you according to my gospel and the preaching of Jesus Christ, according to the revelation of the mystery that was kept secret for long ages 26 but has now been disclosed and through the prophetic writings has been made known to all nations, according to the command of the eternal God, to bring about the obedience of faith- (Romans 16:25-26)

If you asked a room of 10 Biblical scholars this question, most likely you would get 10 different answers. I believe it can be argued that Paul mentions 5 genres—gospel, preaching, revelation, prophetic writings, command/law. What do you say? (Leave a comment.)

Ok, Great. The Bible Has Genres. What’s the point?

First, the importance of “context” for studying the Bible cannot be overstated. And, for any Biblical passage, three primary contexts need to be established:

The introduction to the MLK writings give a short historical and literary context. For example, using the Letter to Coretta:

Imagine finding this letter somewhere and not knowing it if is a speech, letter, or sermon. Can you imagine the confusion? Can you imagine the misinterpretation? You could still gain something from the letter, but doesn’t it have a greater impact knowing 1) it is a written letter 2) to Coretta, his future wife?

Think of all it tells us about MLK’s character, the relationship with his wife, the intelligence of both, his respect for women (1952!), truly a person of integrity who practiced what he preached, etc.

Knowing the literary context of a passage begins with knowing its genre. It answers a lot of questions—“Is Isaiah speaking?” “No, it is God speaking through Isaiah because this is prophetic writing.”

At the same time, it brings to mind many questions, intelligent questions, questions that need to be asked, pondered, researched—“Why is the tiny book of Ruth stuck in the middle of Judges and 1 Samuel?” “Why did God want us to know about harvest time in this little town?” Ruth is OT historical narrative, so obviously its presence is very important in the historical narrative of the nation of Israel. Maybe the end of Judges and the beginning of 1 Samuel need investigation to determine the theological significance of the Book of Ruth?

Listed below are the major categories of genre within the Bible:

Biblical Genres Cause Things To Jump

…off the pages of Scripture, that is. 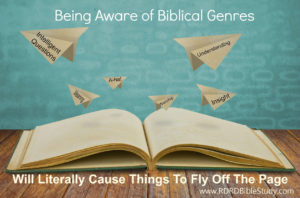 And, please don’t let the next sentence cause you to jump (because it really shouldn’t), but even genres have genres. You don’t have to know all the sub-genres, but familiarizing yourself with the main genres will take you places that you have only dreamed of going. Things will literally jump off the pages of your Bible.

Eventually, each genre has (or will have) its own RDRD post. Sometimes a sub-genre will be the subject, i.e. a parable is a sub-genre of Gospel genre. The genre need-to-know bases will be covered, so check out upcoming posts in the Biblical Genres category. And please check back with RDRD Bible Study if you don’t see the one you are interested in (though I recommend reading all of them, of course).

If you choose the notification genre of Social Media, choose from multiple social media sub-genres to connect:

For in-depth reading on the subject of genres and sub-genres (aka embedded genres), I highly recommend Introduction to Biblical Interpretation by Klein, Blomberg, and Hubbard. I became joined at the hip with this book in seminary, since it was the textbook used for a required course in Biblical Hermeneutics. I still refer to it frequently.

And I am not kidding – I have a dream that people everywhere know about Biblical genres.

Genre—it’s all about particular style, form, and content of a text.

Knowing about literary genre will help in studying the Bible more effectively—not just one passage or book, but the whole thing. Using the literary genre in Bible study is one of the first steps in rightly dividing the Word of God.

All Christians are on the front lines of proclaiming the Word, whether you are a student, teacher, parent, blogger, writer, corporate worker, aunt, nurse, etc., you are preparing the next generation of Christian proclaimers. You have a serious job. God bless you all and I am praying for your ministry.

Therefore, if anyone is in Christ, he is a new creation. The old has passed away; behold, the new has come. 18 All this is from God, who through Christ reconciled us to himself and gave us the ministry of reconciliation; 19 that is, in Christ God was reconciling the world to himself, not counting their trespasses against them, and entrusting to us the message of reconciliation. 2 Corinthians 5:17-19