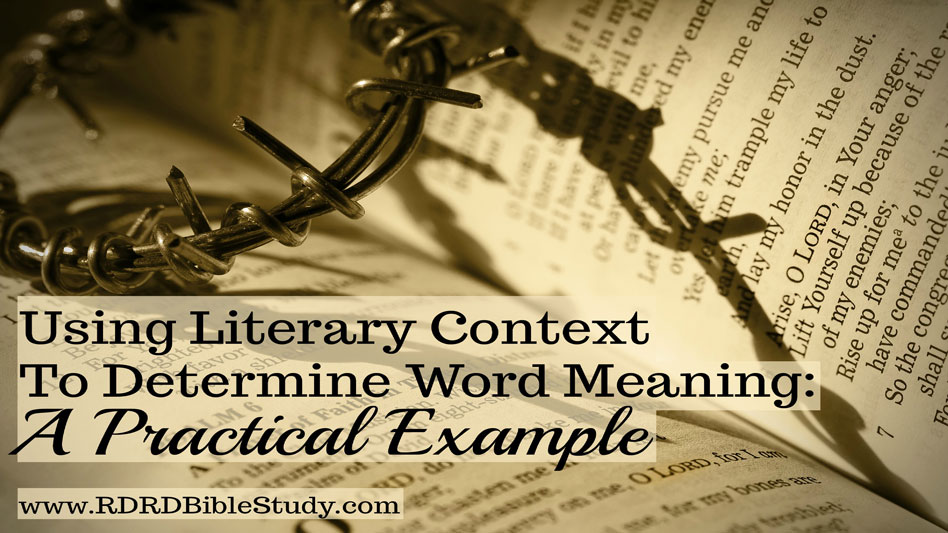 Being alert to the contours of a bible passage’s literary context offers one of several components necessary for studying the Bible effectively. Recognizing the literary context, i.e. the genre and structure of the language, leads to a more precise interpretation.

Determining the accurate meaning of Hebrew and Greek words can be tedious. Many words from the OT and NT have multiple meanings or a wide range of meanings.

To assist in precise word interpretation and translation, there is no need to look further than the text itself. Literary context is the most trustworthy guide in determining the most precise meaning of a word. 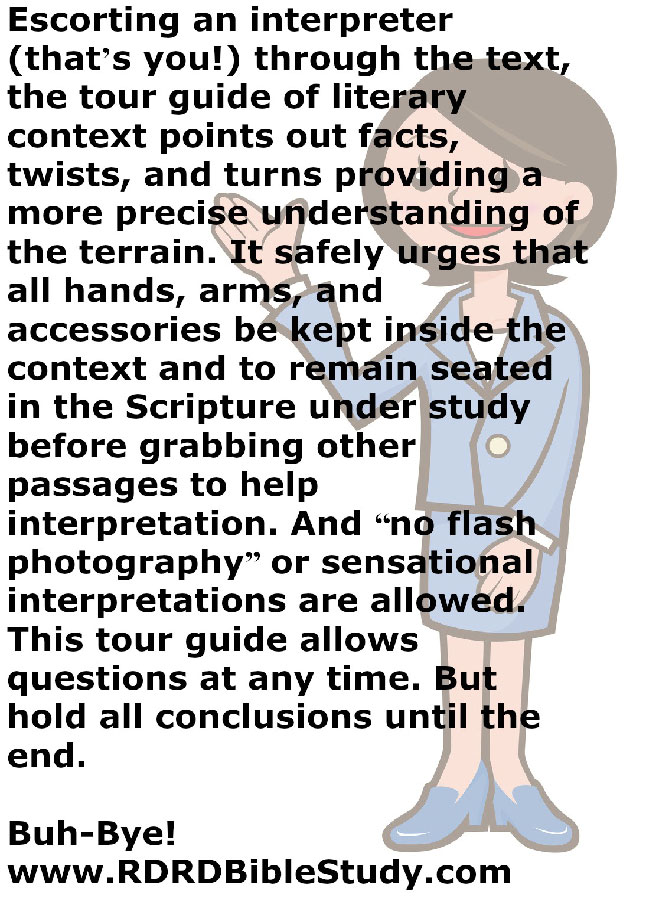 As with any guide, paying attention to the tour details produces the most beneficial information related to the journey. And no one knows the passage quite like this guide.

Likewise, the phrase, sentence, and paragraph must be understood according to its natural meaning in the literary context in which it occurs. In this way, literary context guides the translation process.

Let’s use John 16:7-11 as a “brief example” to demonstrate how word meaning is determined by context. (Brief = An inordinate amount of time spent researching every detail of John 16:7-11 is not the point here, otherwise, it would be waaaaaaay too long. The purpose of this post is to provide a practical example of using context to interpret a word more precisely.)

The genre of John is gospel, which has been described as a historiography—elements of both history and biography—the Gospels proclaiming the message of salvation through Jesus Christ’s life, ministry, and work on earth. John 16 is a Gospel sub-genre known as discourse.

In this section of the discourse, John 16:8-11, the disciples are listening as Jesus tells them that He will return to the Father. When He returns, obviously the crucifixion and resurrection will have already taken place. (Jesus knows this and so do you. But the disciples don’t know it yet.) In verse 7 Christ begins to explain the coming of the Holy Spirit and what the Holy Spirit will do.

(7) Nevertheless, I tell you the truth: it is to your advantage that I go away, for if I do not go away, the Helper will not come to you. But if I go, I will send him to you. (8) And when he comes, he will convict the world concerning sin and righteousness and judgment:  (9) concerning sin, because they do not believe in me; (10) concerning righteousness, because I go to the Father, and you will see me no longer; (11) concerning judgment, because the ruler of this world is judged.

What Does It Mean “He Will Convict”?

Looking in BDAG (the go-to NT Greek dictionary), this word’s range of meaning has 4 definitions. Following are the definitions, each listed with an example of its usage in Scripture.

1) to scrutinize or examine carefully, bring to light, expose, set forth

2) to bring a person to the point of recognizing wrongdoing, convict, convince

4) to penalize for wrongdoing, punish, discipline

“And when he comes, he will convict the world concerning sin and righteousness and judgment.”

In The Louw-Nida Greek-English Lexicon of the NT, “sin” is defined as “to act contrary to the will and law of God – ‘to sin, to engage in wrongdoing, sin.'” Keep that definition in mind. One more time, reading out loud, substitute the word being studied in the passage—convict—with each definition from BDAG:

What do you think? These were worded quickly to use as a starting point but they could have been worded differently, longer, etc. Do whatever is needed to help you understand. 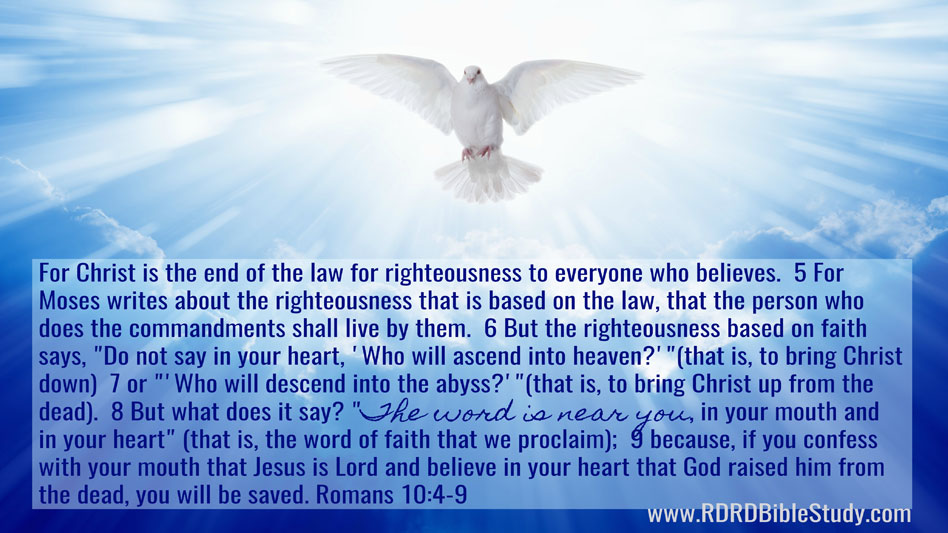 In context, Jesus is talking about leaving the world and returning again. While He is away, He explains how the Holy Spirit will work in the world. It ought to be observed that in this passage Christ does not speak of secret revelations of convictions, but of the power of the Spirit. The Holy Spirit’s power is present and apparent in the outward doctrine of the Gospel.

In Jesus’ discourses, He typically teaches and/or explains. The structure of this passage shows clearly a 3-point, if you will, outline of the Spirit’s work of convicting the world. Then it is followed by 3 sentences using a word from each point. Verses 8-11 clearly work together as a literary unit.

Notice the progression of what the Holy Spirit will “convict” the world of–sin, righteousness, judgment (v. 8). Notice how each is explained in verses 9-11.

(8) And when he comes, he will convict the world concerning sin and righteousness and judgment:

(9) concerning sin, because they do not believe in me;

(10) concerning righteousness, because I go to the Father, and you will see me no longer;

(11) concerning judgment, because the ruler of this world is judged.

Sin—The demonstration of the Spirit begins with the conviction of sin. Unless a person recognizes their sin, they remain unable to acknowledge their need of Christ (1 John 1:8-10). Jesus here links sin with unbelief. Unbelief separates us from Christ and by default all that is left is sin. When we believe Jesus, we are justified by faith in Christ (Gal. 2:16). Jesus condemns the depravity of human nature, because apart from Him, it is impossible to be reconciled to God (v. 9).

Righteousness—Next to the conviction of sin, the second step that the Spirit convicts of is righteousness. Through the Gospel message, the Spirit proclaims that the only way in which we are counted righteous is through faith in Christ (Rom 3:21-22). Jesus adds “because I have gone to the Father and you will see me no more” (v. 10) to indicate that by His ascension to heaven, He has established the Kingdom of God on earth and now sits at the right hand of God, confirming righteousness for all who believe.

Judgment—The Holy Spirit convicts the world of judgment because Christ has defeated Satan and believers are no longer under his tyrannical reign, i.e. the ruler of this world is standing judged already (v.11). Because the prince of the power of the air (Eph. 2:1) has been cast aside, things that were formerly filled with chaos and confusion, Christ has now restored to order. On the flip side, unbelievers remain in chaos and confusion under the influence of the sinful nature. 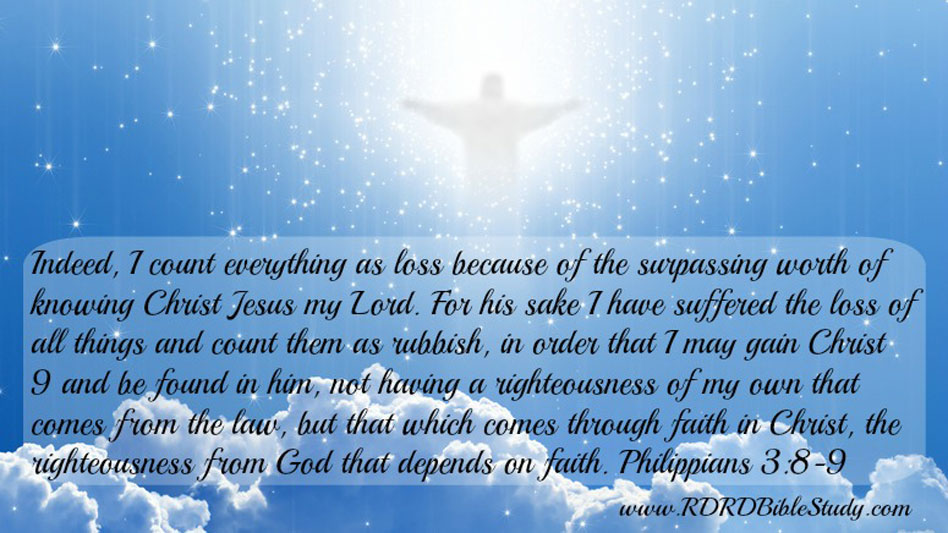 The Work Of The Spirit

The Holy Spirit of God, the third person of the Trinity, is doing the work of Christ, the Son of God, on earth. Like Jesus, He will also be rejected (rejected=blasphemed, the unforgivable sin, Mark 3:28-29; Luke 12:10). Again this emphasizes why Jesus said in verse 9 “concerning sin, because they do not believe in me.”

Therefore, the most appropriate definition for the John 16:8 usage would be #2, bringing the world to the point of “recognizing their wrongdoing concerning sin” as shown by the righteous work of the Holy Spirit.

Look At Other Verse(s) Whose Usage Has The Same Definition

In James 2:9 (cited above), wrongdoing and sin are recognized by the law. The Law convicts of sin by its testimony to actions and behavior that are contrary to God’s rule. In John 16:8, it is the Holy Spirit, through the preaching of the Gospel, that convicts the world of sin. Not the voice of preachers, evangelists, or friends, but the power of the Holy Spirit stirring belief through God’s truth.

The purpose of this post has been to provide a brief example of using literary context to help determine word meaning.

In John 16:7-11, the context makes clear which of the 4 meanings of “convict” to use. The first, third, and fourth definitions may make sense in certain cases, but they do not “fit” the context of Jesus’ discourse. Jesus does not explain the purpose of the Holy Spirit’s coming as to examine the world, to express disapproval of the world, or to punish the world. But to convict the world of their sin in order that they may believe and receive forgiveness of sin and so avoid the judgment that brings death.

You’ve got the idea now, right? Try it out. Even if a dictionary gives you the particular definition to use, ask “Why this one?”

Not only does the Holy Spirit work through the preaching of the Word, but also through the Word itself. The Spirit and the Word cannot be separated (2 Tim. 3:16 et al). God also reveals Himself through Creation (Romans 1:18:21). The Word of God includes the prophetic word “Thus saith the LORD,” and Christ is the Word made flesh.

Using the insight gained through looking at the literary context of John 16:8, how do the following passages express the same theological concept as Jesus does regarding the Spirit’s work of conviction?

Zechariah 7:12-14   12 They made their hearts diamond-hard lest they should hear the law and the words that the LORD of hosts had sent by his Spirit through the former prophets. Therefore great anger came from the LORD of hosts.  13 “As I called, and they would not hear, so they called, and I would not hear,” says the LORD of hosts,  14 “and I scattered them with a whirlwind among all the nations that they had not known. Thus the land they left was desolate, so that no one went to and fro, and the pleasant land was made desolate.”

2 Peter 1:19-21   19 And we have something more sure, the prophetic word, to which you will do well to pay attention as to a lamp shining in a dark place, until the day dawns and the morning star rises in your hearts,  20 knowing this first of all, that no prophecy of Scripture comes from someone’s own interpretation.  21 For no prophecy was ever produced by the will of man, but men spoke from God as they were carried along by the Holy Spirit.

Leave a comment. I look forward to reading your insights. God bless.