A Date To Memorize: AD 70 Destruction Of The Temple 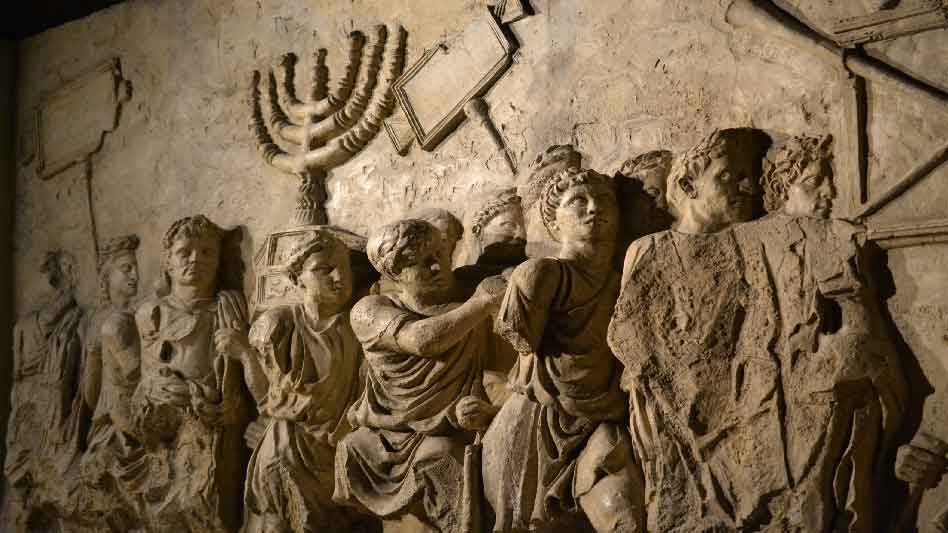 A Date to Memorize – AD 70 The Destruction of the Temple

Christianity’s Beginning And Its Jewish Environment

The birth of the Christian faith happened in Judea. The central events of Christianity, Jesus’ crucifixion and Resurrection, occurred in Jerusalem. Deeply rooted in their Jewish environment and culture, the earliest Christian communities emerged.

At Christianity’s inception, it shared with Judaism the same headquarters city of Jerusalem, the temple as a place of meeting and teaching, the Hebrew Scriptures, and similar leadership structures. Even the synagogues throughout Asia Minor served as the church’s primary places of outreach.

The events of AD 70 propelled the church out of its Jewish environment into becoming an independent religion. Though independent, the church still recognized its deep-seated connections to Judaism. The Christian Bible contains the Hebrew Canon along with the NT books canonized by the church as Holy Scripture. The NT authors interpreted OT Scripture in light of Jesus Christ, the Jewish Messiah and God’s Servant to bring salvation to all nations.

And now the LORD says, he who formed me from the womb to be his servant, to bring Jacob back to him; and that Israel might be gathered to him – for I am honored in the eyes of the LORD, and my God has become my strength – 6 he says: “It is too light a thing that you should be my servant to raise up the tribes of Jacob and to bring back the preserved of Israel; I will make you as a light for the nations, that my salvation may reach to the end of the earth.” Isaiah 49:5-6

The NT and other ancient documents written around the same time period document how the Roman occupation of Judea greatly distressed the Jewish people. Though the chief priests and officers successfully persuaded Pontius Pilate to crucify Jesus, the Jews did not always possess such authority over the Roman officials. Rome had often raided the temple treasuries, deployed Greek-speaking leaders who cared nothing about the Jews, and superseded positions of wealth while pushing many Jewish people into poverty and debt.

In AD 66, the Greeks attacked the Jewish quarters in Caesarea. Instead of intervening, according to their own law of Pax Romana, the Roman armies did nothing to protect their vassal state and stop the brutal attack. This event set a Jewish revolt  in motion which eventually led to the mobilization of Roman legions to Judea and all-out war. 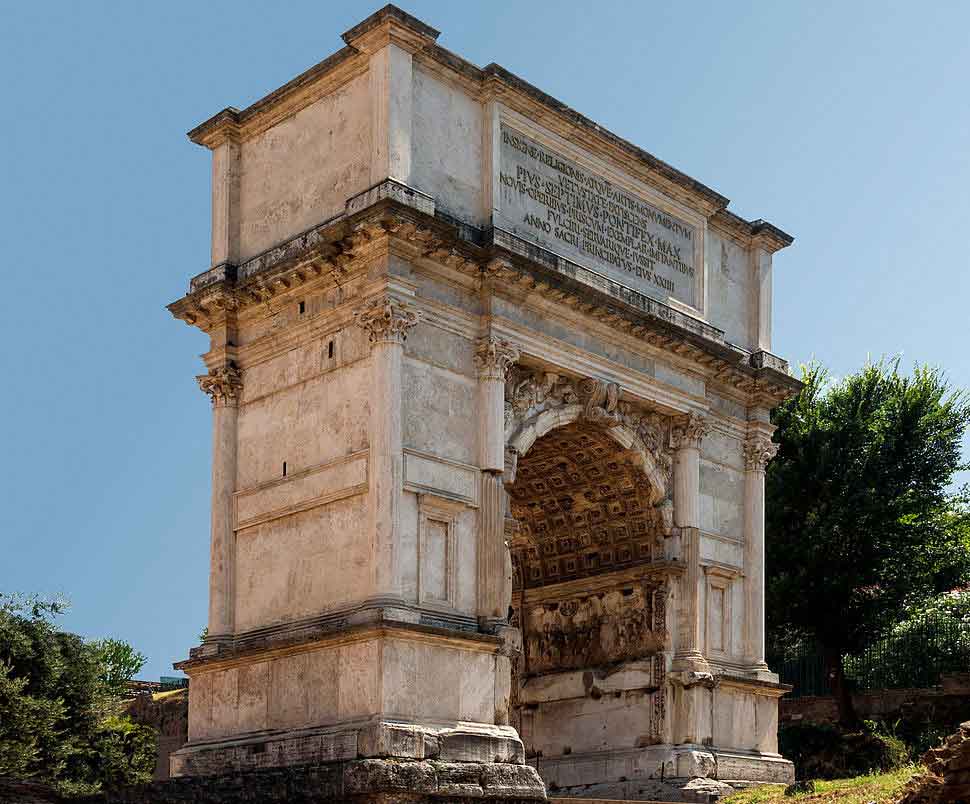 Arch of Titus in Rome built for the Roman General Titus who led the armies that destroyed Jerusalem. This post’s feature image is a close-up of a relief located on the inner part of the arch which reveals Roman soldiers carrying spoils from the destruction of the Temple, including the golden Temple Menorah, the Table of the Shewbread, and the silver trumpets which called Jews to the festivals. The Romans are in triumphal procession wearing laurel crowns. The soldiers carrying the Menorah have pillows on their shoulders.

The Roman armies laid siege to Jerusalem in April of the year 70. In September of the same year, the most zealous rebels took their last stand as the Roman army stormed and destroyed the temple.

To be sure, the destruction of the temple and the fall of Jerusalem stands as a traumatic event in the course of history for Judaism and Christianity. For Judaism, the catastrophe raised both theological and existential concerns. Bewildering issues concerning the covenant and theodicy threatened faith in the God of Israel, unless the troubling issues could be satisfactorily explained, i.e. the nation’s sin brought about the Babylonian exile. 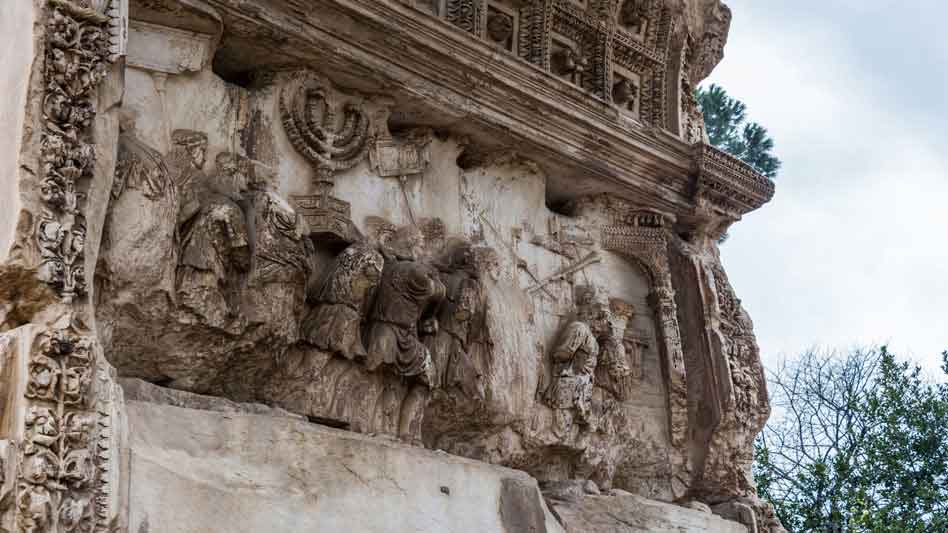 The Spoils of Jerusalem relief located on the Triumphal Arch of Titus. This side angle shows some details clearer. The arch was erected in AD 82 by Emperor Domitian, Titus’ younger brother.

The destruction’s effect on “Go and make disciples of all nations” (Matt. 28:19-20) must have seemed especially detrimental to the earliest Christians. Certainly the spread of Christianity had transpired steadily before the event. After the persecution of Stephen, the Gospel spread throughout Judea (Acts 8-11). Paul had utilized the church in Antioch as a missionary outpost for his multiple journeys in Asia Minor and later into Greece. By the end of the book of Romans, Paul is already planning to set up a base in Rome.

Still, the historical and theological dynamics of a Jerusalem and temple destruction would have loomed large, just as it does for Christians 2000 years later. After Christ’s death and resurrection, the apostles continued to live and minister in and around the temple. Jerusalem became the central place of Christianity’s communications, organization, and authority. It was the residence of the first leaders of the church, i.e. James the half-brother of Jesus who presided over the Jerusalem council (Acts 15). Some NT letters are addressed to the Jewish diaspora. Some NT letters display concern over differences between Judaism and Christianity. And the NT writers’ interpretation of the OT taught over and over how Jesus’ work fulfilled the promise of God’s grace to the Jews and to all nations.

“And the foreigners who join themselves to the LORD, to minister to him, to love the name of the LORD, and to be his servants, everyone who keeps the Sabbath and does not profane it, and holds fast my covenant – 7 these I will bring to my holy mountain, and make them joyful in my house of prayer; their burnt offerings and their sacrifices will be accepted on my altar; for my house shall be called a house of prayer for all peoples.” Isaiah 56:6-7

And Jesus was teaching them and saying to them, “Is it not written, ‘My house shall be called a house of prayer for all the nations’? But you have made it a den of robbers.” Mark 11:17

Christianity Pushed Out Into the World

Though the effects of the events of AD 70 may have appeared detrimental to the spread of the Gospel, these events actually pushed Christianity outward into the “world,” away from its Jewish environment into a religion advancing toward universal significance.

In “Turning Points: Decisive Moments in the History of Christianity,” Mark A. Noll writes:

…it is well to be reminded of how symbolically important was the Roman destruction of Jerusalem. By making it impossible for Judaism to continue in a normal course of development, the Romans also forced great changes upon the Christian church. The turning point of Christian history at Jerusalem in A.D. 70 was the church’s emergence on its own. (Baker Academic, 2000, p.28)

Ironically, a few decades after AD 70, Rome would replace Jerusalem as the center of Christian communications and authority.

Can you name other significant events in Christian History having to do with the city of Rome? 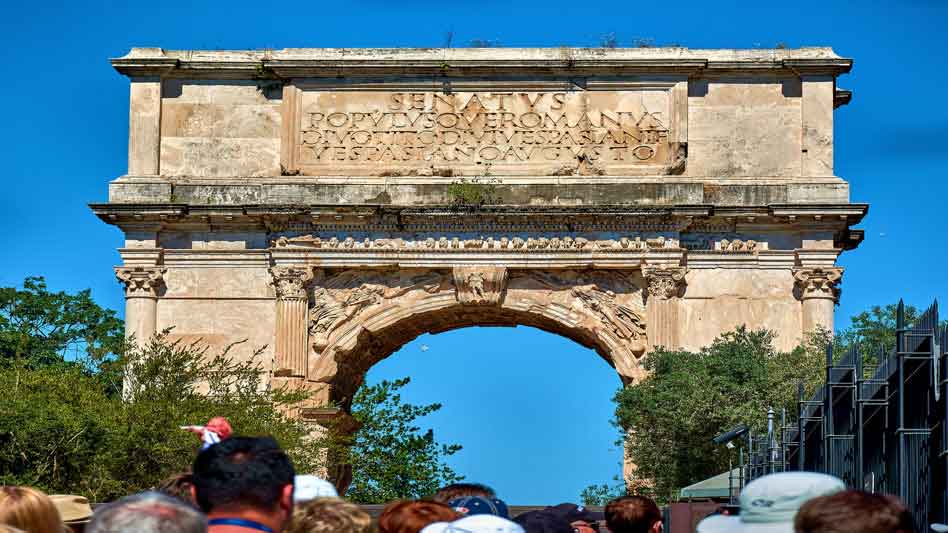 Triumphal Arch of Titus front view. Located on the Via Sacra, Rome, to the southeast of the Roman Forum. It was constructed in AD 82 by the Emperor Domitian shortly after the death of his older brother Titus to commemorate Titus’s victories, including the Siege of Jerusalem (AD 70).

The blessed Apostles, after founding and building up the church, handed over to Linus the office of bishop…. He was succeeded by Anacletus, after whom, in the third place after the Apostles, Clement was appointed to the bishopric. He not only saw the blessed Apostles but also conferred with them, and had their preaching ringing in his ears and their tradition before his eyes… 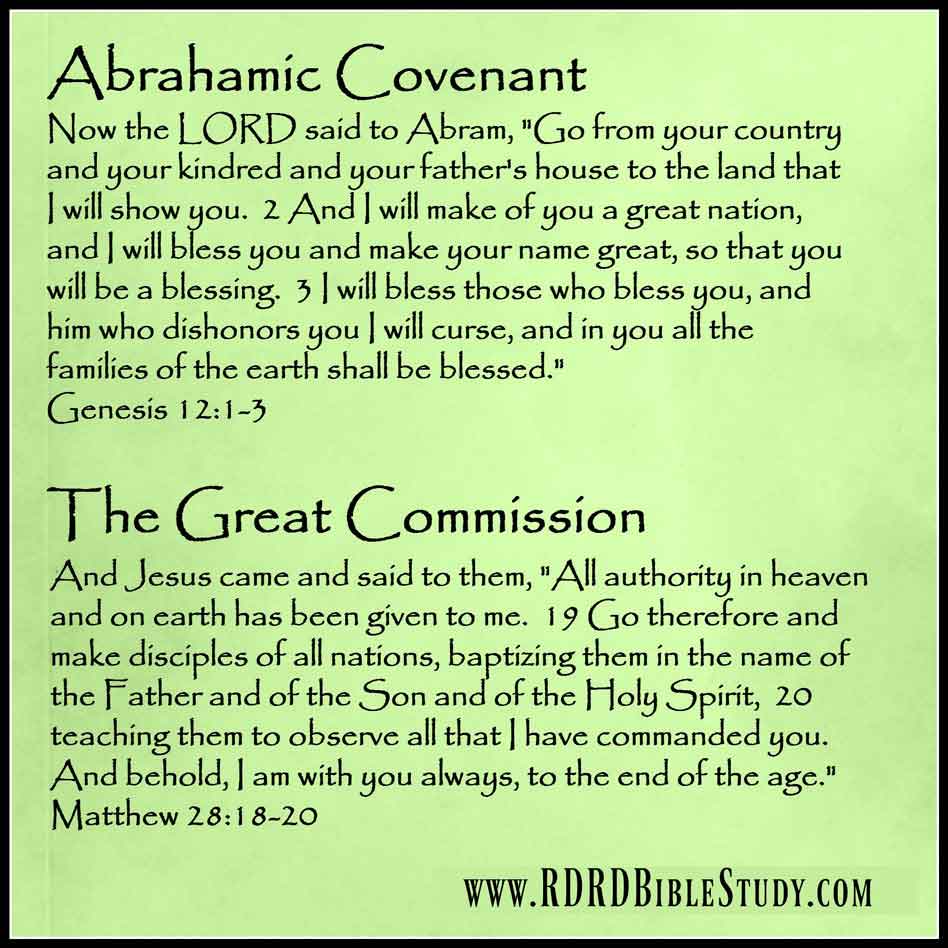